I recently was contacted by Linda Horncastle, an Occupational Therapist who lives and works in the United Kingdom. She wanted to know my opinions regarding the use of cranial electrical stimulation (CES) for the treatment of fibromyalgia. My first response was wise and confident: I told her I hadn't even heard of it. But then, not wanting to come across as more of an idiot than I already seemed, I told her I would look into it and get back to her.So here I am, getting back to her (and you) regarding my thoughts on CES, having done some reading about it. 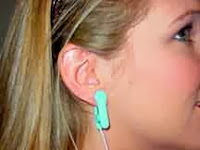 The treatment has been approved by the US Food and Drug Administration (FDA) for the treatment of depression, anxiety and insomnia. Usually, CES is administered for between 20 minutes and one hour per treatment; and some patients receive several treatments per week over weeks.

Recently, several have been using it also for the treatment of pain. The question that Ms. Horncastle had for me was: do I believe it works? To answer her, I have done a search of the medical scientific literature to see what I might find. I hadn't expected to find a whole lot; but I was somewhat surprised, in that at least two well-designed, randomized, sham-controlled, double-blinded studies have been conducted and reported.  By randomized, sham controlled and double-blinded, what I mean is that a number of patients with fibromyalgia were randomly assigned either to receive real treatment (real CES) or a mock treatment, in that ear clips were applied, but didn't administer any electrical currents.  Since patients don't actually feel the real currents (it isn't like sticking your finger in a light socket; there is no shock), the patients in these two studies truly did not know if they were receiving the real CES or fake CES.

How good were these studies?  From a scientist's point of view, two positive studies are not definitive. However both studies noted above were well-designed, in that they were randomized, sham-controlled and double-blinded. What this means is that neither patients nor doctors could falsely bias the results. In this regard, the studies were good.  However, one study only involved three weeks of treatment and the other eight weeks.

More recently, a Cochrane database review has been published  assessing the effects of CES and other forms of non-invasive brain stimulation that include repetitive transcranial magnetic stimulation (rTMS), cranial electrotherapy stimulation (CES), and transcranial direct current stimulation (tDCS). Overall, a 15% reduction in pain was noted between active and sham treatments over 33 studies.

So... to answer Ms. Horncastle:   I think that there is certainly reason to believe that CES can be helpful in some fibromyalgia patients, but the effects regarding pain reduction will usually be small, in the order of 10 to 30%.  However, greater improvements might be observed in sleep and other symptoms, resulting in an overall improvement in quality of life.

Are CES and other forms of non-invasive brain stimulation safe?  That question is harder to answer. The FDA considers them so. What might happen twenty and thirty years down the line, no one can be sure. For years, scientists have been trying to determine if society's now rampant use of cell phones and other hand-held electrical devices will result in increased rates of brain cancer. So far, no significant increases have been identified. But again, what will happen in 20 or 30 years?  Time will tell.  I suggest, however, that the risk of CES devices used in the short-term will likely be very low.  Note also that we don't know the long-term risks of many other things, including some of the newer drugs now being used for fibro.

The bottom line:  Would I recommend that CES be used in a fibro patient?  I believe that, if you have a therapist who is knowledgeable and judicious in its use, and you have symptoms that are interfering significantly with your quality of life, CES would be reasonable to try. It might especially help your sleep. And I think life always seems much more tolerable after a good night's sleep.