Poll Results - If You Could Make ONE PERSON Believe in Fibro, Who Would It Be?

Readers have spoken. Over the last couple of weeks, I've had a poll on my home page asking people the question: Which disbelieving person would you MOST want to believe fibro is real?  And the results are now IN (drum roll please)... 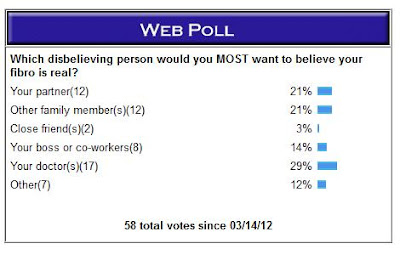 Sadly, doctors (who should know better) were the most likely individuals to be unwanted disbelievers. But the 29% is very much in line with the recent Canadian survey that showed that one in four family doctors believe all their fibro patients are faking. That's one in FOUR doctors with a stone-age understanding of chronic pain!!! "Calling Dr. Flinstone. Dr. Fred Flinstone."

But that 21% of you have a disbelieving spouse and another 21% disbelieving family members is equally disturbing, though not surprising, from what I've seen when I ask this question to audiences at talks I give. (And when I do book signings, you'd be amazed how many people buy a book for their mother-in-law).

If you'd like a few snappy comebacks for these people, maybe you can find them in the following video. Listeners particularly seem to like my comment about parrot snot (Now, if you haven't already, you'll HAVE to listen to it):


Anyway. Try some of these comebacks out on people who won't hit you first, just for kicks. Otherwise, please go to my latest poll and tell me what treatment is helping you the most. Foggy minds (my own included) would like to know.

This is something I just thought of today when I was speaking with Kellie Ann Peterson on the EveryDay Wisdom for Families Show. It's simple and short, but I love the idea, so I'm going to share it with you.

If you have fibro or are just starting to exercise again and decide you want to use one of these exercise videos you put on the TV, here's a tip:

The first couple of times you play the video... don't exercise. Just sit in a comfy chair and WATCH THE VIDEO. This will allow you to get a general sense of what the exercises are going to involve, and how rigorous they will be so you know what to expect when you finally start doing them.

Remembering the importance of pacing yourself, you might decide, for example, to only do the first, fourth, sixth and tenth exercise, because they're easier and it will give you time to rest up between them.

Remember - this exercise routine is for YOU and no one else, so feel no obligation to keep up with the instructor or the others who are in the video.

So rermember... JUST SIT BACK AND WATCH YOUR NEW EXERCISE VIDEO THE FIRST COUPLE OF TIMES THROUGH... THIS WILL GIVE YOU A CHANCE TO PACE YOURSELF BETTER WHEN YOU START DOING THE EXERCISES.

And check back for more helpful tips!  :)

This is a radio show I just finished for EveryDay Family Wisdom with host Kellie Ann Peterson, talking about fibromyalgia in children.

That's right... fibromyalgia is the 'old woman's disease' that even children get (young women get it too, as do men, but that is for a different blog).

Anyway... here I am with Kellie Ann Peterson:

Feel free to comment on this or any other of my blogs.

On Linked In, I have been having an on-going discussion with a Dr. John Quintner about WHAT CAUSES FIBROMYALGIA. I won't go into his theories and why we disagree on many points. But I do want to copy for you my latest response to him, when he claimed that I was ignoring the mind-body nature of disease by insisting that fibro is a physical disease (his belief is that it is a response to stress)


Anyway, here is what I wrote today:

Every disease has a psychological component, with chronic diseases and serious diseases that risk life and limb especially prone. So I am a firm believer in the biopsychosocial (mind-body) model of disease. Again, I have a full chapter on this in my book. My beef is with those who claim that fibromyalgia is ONLY psychological (e.g., depression, anxiety or hypochondria).

Having spoken to and followed (in medical practice) thousands of individuals with fibromyalgia, and performed countless research studies on them, I have also come to believe that health care providers who fail to acknowledge all components of this illness and all chronic illnesses (biological, psychological and social) do their patients a huge disservice.

Two examples: I remember several patients whose marriages were absolutely crumbling because their spouse just did not believe that their pain could possibly be as bad as they said. I purposefully scheduled appointments just to address the spouse's questions and concerns (with the patient's permission and presence, of course); sometimes, I spent up to 90 minutes at a meeting like this; and it often made a world of difference. A non-supportive disbelieving spouse/partner suddenly became supportive again.

I also had countless patients who were struggling at work but receiving no accomodations at all from their employers. Strongly worded letters from me (in which I informed the employers that their lack of support was, in my opinion, worsening my patient's health), also often had a beneficial effect. Or if they were truly disabled from work, I supported that as well with letters and phonecalls as needed (and I never charged a single patient a penny for this).

In both these instances, not only were the patient's social cirmcumstances improved (improved marital or work relationships), but anxiety and depression diminished, and so did their pain and other symptoms.

The head bone IS connected to the foot bone! But that doesn't mean there isn't real pathology in the foot. That is the essential jist of my message.

There is tremendous frustration and fear among many with fibro, as they desperately search for answers to explain why they feel the way they do, and solutions to help them feel better.

I had a perfect record with my fibro patients - I cured NONE of them. But I believe I was able to HELP the vast majority, by listening to them, by answering their questions, by believing them, by supporting them as mentioned in the exampples above, and by working WITH them to find treatments that worked for THEM. The treatment of fibro is extremely individualistic. What works for one may make another worse. Some tolerate medications while others don't or want to be treated without meds. No worries. Together, we'd find something to help THEM.

Doctors and researchers can pontificate until the cows come home and make sandwiches about what causes or doesn't cause fibro; and I believe that we have a MUCH better understanding than we did even 10 years ago. But those who have fibro need help and support NOW. They need honest answers - even if these answers are still not certain or complete - NOW.

I have sought to show my undying support to the fibro community for years. I know the leaders of fibromyalgia patient advocacy organizations around the world, communicating with many of them on a regular basis. I have emails from 3 of them in my email box for today alone. My intention is to continue to provide them my undying support until there either is no further need for it or I am no longer physically able.

Nothing anyone can say or do will dissuade me from this. And THAT is what I am all about.

The following is an article I've just been asked to write for the HEALTH CARE REPORT, a magazine published in Pittsburgh, Pennsylvania. Thought you might like to see it. I will also post it on the Newsletter page of my website at http://thefibrofog.com/ in case you want to download a copy (for FREE) to give to any fibro doubters you know - like your doctor, insurers, caseworker, employer, or other.
Real or Imagined - One in Four Doctors Thinks All Fibromyalgia Patients Are Faking
But the Pain of FM Can Now be Seen, Proving Otherwise
Imagine having pain all over your body, being exhausted all the time, having constant headaches, and feeling like your mind is always in a fog. Together, it’s like the worst flu you’ve ever had, but it lasts forever.  Now picture that no one believes you, not even your doctor. That is what fibromyalgia is for many.
Fibromyalgia, sometimes called FM, is a chronic, often-debilitating pain condition that affects 100 million people worldwide. And yet, in a recent survey, one in four doctors feels that all these patients are faking, and that FM doesn't even exist. It has been called “an illusionary entity”, “a common non-entity”, and “the syndrome of feeling out of sorts”. Even doctors who believe their patients aren’t faking, mostly believe that they’re merely depressed.
Arguments against FM are many; but every one of them can now be shot down by published scientific evidence.
But the most convincing evidence supporting FM as a legitimate PHYSICAL disorder is that the pain can now be seen with advanced brain imaging techniques, like SPECT scans and functional MRI. Unlike CAT scans and traditional MRI that show what the brain looks like, these newer scans show how active different parts of the brain are... and the midbrain lights up in patients in pain. They also light up in FM, not only in response to a painful stimulus, but to other stimuli like hot and cold, light touch, and even certain sounds, indicating an overall hypersensitivity of the brain to things that cause no problem to the rest of us - like a handshake, a hug, or a cool breeze.
Other abnormalities can now be seen too, like alterations in blood flow to various parts of the brain, which might explain the mental cloudiness, sometimes called the ‘fibro fog’, that so many feel. There also are proven imbalances in a variety of brain chemicals called neurotransmitters, and in several different hormones. All of these changes say the same thing: that fibromyalgia is a real PHYSICAL illness.
Fibromyalgia is, in fact, a disease of the brain and nerves. Or, more specifically, it is a disease of that part of the brain, called the midbrain, that is responsible for the perception of various body sensations like pain and temperature, and the regulation of sleep. This pain and sleep switch of the body fails to work properly in fibromyalgia and in other chronic pain states. Pain won’t turn off; the bump on the knee that should only hurt for a second or two still hurts several months later, often growing worse over time. And the deep, restful sleep every body needs won’t turn on, no matter how long one spends in bed or on the couch.
The good news is that increased understanding about the underlying mechanisms of pain is leading to more effective ways to control it. The bad news is that too many doctors, lawyers, judges, insurers, employers, and others still don’t believe that the pain even exists. Until this changes, millions will continue to suffer without receiving the help and support they need.
Dr. Kevin White is a world expert in fibromyalgia and award-winning author. His just-released book - BREAKING THRU THE FIBRO FOG: SCIENTIFIC PROOF FIBROMYALGIA IS REAL - has just won a Reader's Favorite book award. Visit his website at http://thefibrofog.com/. His book is available at http://www.amazon.com/ and all book stores.
Posted by Dr. Kevin White at 16:08 1 comment: