First of all, as a parent of four children, let me say that my heart goes out to all the victims of the Newtown Connecticut shooting, and to their families, friends, classmates and co-workers, as well as to the town itself. Never will that town recover its catastrophic losses. Never will that town forget.  My hope is that no one else does either.

What happened in Newtown Connecticut was nothing short of horrific. But what was equally horrific was reading the next day the same old, ill-reasoned rhetoric arguing against stricter gun laws... "guns don't kill people, people do"... and hearing some Americans screaming out defending their Second Amendment right to bear arms.

The fact is that guns DO kill people. Would that misguided and mentally ill young man have walked into that school and killed 26 people with a knife?  Would 26 have died if all he had was a pistol? The sad fact is that semi-automatic weapons provide those who wish to commit mass murder a perfect weapon to do just that, and potential victims no chance to defend themselves.

This week, flags across the US were set at half mast. But that is not nearly enough. It is time to take the weapons that allow for such horrors to take place off the market. Sure, some criminals still will have them. But has a law-abiding citizen EVER defended himself or herself against a semi-automatic-carrying criminal by pulling out their own semi-automatic and shooting the criminal first?

It is long past time to stop the madness. 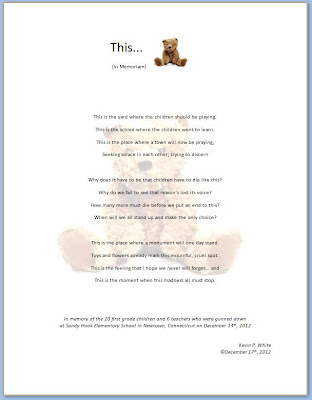 If you have pain in your hands, have you ever had a hot wax treatment at physiotherapy or occupational therapy? If so, how did it feel? Many people find it feels WONDERFUL. Wouldn't it be nice if you could give yourself hot wax treatments at home?

Well... you can... or at least, you can do something that feels much the same.

What you do:
(1) Fill the sink up with hot water. How hot? Hot enough that it's hot, but not so hot that you can't stand to hold a bare hand in it for at least 10 seconds. In other words, we don't want you burning yourself.

This LITERALLY will feel like a hot wax treatment. But it's easy and safe to do and costs next to nothing. Best of all, you can do it whenever you want, wherever you want, so long as you have a sink, thin plastic gloves, and a little mineral oil.

I hope this helps.

A New Poll - How much does your doctor know about fibro?

One of the main objectives behind my book, my videos and my numerous public appearances (on radio and TV and as a guest speaker) is to educate those who DON'T have fibro about this very sadly misunderstood disease.  I have found, over the years, that primary doctors range from not even believing in it, to almost specializing in it.  That being said, most know relatively little.

So my question to you is: how much does YOUR PRIMARY DOCTOR know about fibro? Does he or she not even believe in it? Is s/he average? Is s/he better than average?

Please go to my website and take the poll.


Visit my website
Buy my book
See my other award winning books
Posted by Dr. Kevin White at 12:46 No comments:

The 2012 U.S. Presidential Election is coming down to the wire... less than one week to go... and it's finally time for me to weigh in on the Obamacare vs. Romneycare debate. More specifically, which man, as president, would be better for people with fibromyalgia?

Before I spout my opinion, let me tell you what YOU said.

In a nutshell, roughly half of all respondents felt that Obama would be better, one in four felt Romney would be better; and the remaining one in four either didn't know or felt there was no difference between the two men. To be honest, I find these results not at all surprising... and here's why.

To begin with, Romney himself, during this campaign, claimed that he was writing off anyone relying on government financial support... he was conceding them to Obama. What this means is that any of you who are receiving government assistance for disability or for unemployment, Romney doesn't really really value. He is already convinced you won't vote for him, and doesn't see this as a problem. How does that feel?

Second, although Obama's health care reform is not perfect, it is skewed towards helping those who cannot afford private insurance or who are otherwise ineligible for it. In my years working with many patients with fibromyalgia, I found that many were dropped by their private insurance carrier once fibro was diagnosed. Some individuals who continued to work, lost their insurance when their company switched from one insurance carrier to another, because each employee had to be approved before being covered. Others retained their insurance, but only for non-pre-existing conditions... so, if you had fibromyalgia before your company switched insurers, you were out of luck. Returning to a system that relies predominantly on private insurers, as Romney and Ryan intend (as a priority), will open all these cans of worms again for Americans with fibro, and many will lose their insurance one way or the other. Obama has fought to make sure those who can't afford or are otherwise ineligible for insurance still can get the health care they need (and, in his and my opinion both) deserve.

Also, as someone who has lived and worked as a physician in both countries, let me tell you a little bit about how insurers pay emergency rooms or clinics (as an example) for services, if you happen to go there. Hospitals and clinics generally have negotiated arrangements with insurers, so they pay only a percentage of the actual bill. For example, if you go to the ER and have an X-ray done, the charge might be $350 for the X-ray itself, but also $250 to cover the fee of the doctor who ordered it, and $250 for the radiologist who reads it. The final bill for that one X-ray, therefore, will be $350 + $250 + $250 = $850.  Wow, right?  BUT, if you have private insurance and they are billed, the hospitalmight only be paid $200, and yet the bill is considered paid. But what happens if you DON'T have private insurance and, hence, DON'T have a pre-negotiated  arrangement for the hospital? Answer: You are on the hook for the full $850. It is for this reason that, despite Romney's and Ryan's assertions that the U.S. can't AFFORD universal health care, in fact, universal health care is less expensive... because hospitals and emergency rooms, and clinics and private physicians all have pre-negotiated arrangements with the universal insurance provider, so NO ONE has to pay $850 for an X-ray that the hospital is actually happy to accept $250 for. Evidence of this fact is that health care costs in Canada are much lower, per person, than in the U.S.... the two countries aren't even close. In fact, health care services in the U.S. are among the most expensive in the world. And does that make U.S. health care better? The answer is a resounding no. In a just published study, the U.S. was found to have the worst health care delivery system of any of the world's economic superpowers. Again, I truly believe that Obama's health care plan is intended to change this.

Another issue I'll discuss thaty favors Obama over Romney is their stance on women's issues, since fibromyalgia is predominantly a disease of women, with 80% or more of diagnosed cases being female. According to Romney and Ryan, women's disease screening procedures like mammography (for early detection of breast cancer) are 'non-essential' and should not be covered by insurers. Though long considered an 'invisible disease', the truth is that we now have the technology (via specialized imaging scans like SPECT and functional MRI) to SEE pain, and considerable research is being conducted at several centres around the world to refine such tests, as well as to develop blood tests to facilitate in the diagnosis of fibromyalgia. This is a critical issue because one in four doctors in North America still believes that all fibromyalgia patients are faking. Once an objective test is available to diagnose this disorder, many if not the vast majority of these naysayers will become believers. But if Romneycare won't even cover a long-standing, routine and relatively inexpensive screening test for breast cancer, what chance is there it will spring for ANY of these new tests for fibro? Answer: virtually none.

I pride myself on being a fairly balanced and even-minded person; so I would like to say a few nice things about Romney here; but frankly, in terms of the fibromyalgia and chronic pain issue, I just can't see them. Each person who reads this must make their own decision. But I've made mine as a dual citizen who is eligible to vote in both Canada and the U.S., and as a physician, researcher and staunch fibromyalgia patient advocate.

I'm sorry, Mitt. But Obama and Obamacare have my vote.

Breaking Thru Hits #3 on Amazon

Thanks to everyone who has bought my fibromyalgia book or has recommended it to someone else... just today, it climbed to #3, as the third most popular book on fibromyalgia at Amazon. 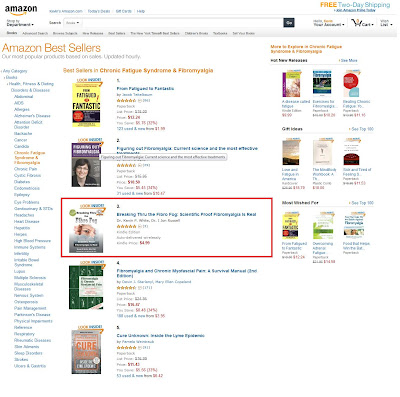 Of course, my goal is to have it hit #1 in this list and the top 100 overall at Amazon. Why? Because the top 100 books at Amazon make other best-seller lists, like the NY Times best seller list... and then the book can really take off. Note that 15% of GROSS proceeds are being donated to charity to fund fibromyalgia research. It'd be really great to see my book start making serious money for research purposes to help find a cure for fibro, with other proceeds going towards supporting other charities like the Kid's Help Phone and Big Brothers, Big Sisters.

So PLEASE let others know about my book, which you can check out at
http://thefibrofog.com