And here's some news. This Saturday from 6 to 7 p.m., I will be doing talk radio on the David Essel Positive Talk Radio Show, the longest running positive talk radio show in North America, with over 12 million listeners. 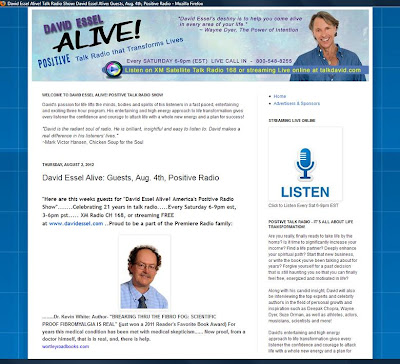 Tune in to XM Radio CH 168, or streaming FREE. David Essel's blog is at
http://davidesselalive.blogspot.ca/2012/08/david-essel-alive-guests-aug-4th.html

Dial in, then call in and ask your questions. I look forward to hearing from you.

Results of Latest Poll: Does Fibro EVER Get Better?

The latest poll results are in and the people have spoken.  To be honest, the results are not what I personally would have hoped, but perhaps it was because the question was interpreted differently than I intended. The question was - Do you believe that the pain and fatigue of fibro can and often do get better?  What I meant was - do you think these symptoms ever improve; NOT do you think these symptoms ever completely go away?  I may be wrong, but I SUSPECT that many interpreted the question in the latter way.

Nonetheless, here are the results: 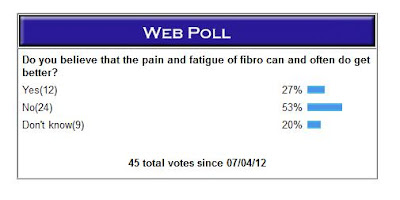 In fact,  research has shown the following things:

(4) The percentage of people who have fibro steadily declines after age 65 (this also was shown in my LFES study) suggesting that, as the most likely possibility, fibro tends to go into at least relative remission after this age.

The message is - DON'T LOSE HOPE!  I have had patients who've had terrible fibro for 20 or even 30 years who suddenly started doing much better, either because of some treatment they tried that just worked (where nothing else had), or because they'd finally discovered how to best manage their own symptoms.

Now that I've been all serious, let me lighten up the next poll by asking about the Olympics... specifically, WHAT FIBROMYALGIA-SPECIFIC EVENT WOULD YOU LIKE INCLUDED IN THE NEXT OLYMPICS? This poll is fun (and funny), so be sure to check it out.