A few years ago, I published a comic strip in a local magazine. The strip was called HADDOCKS ANONYMOUS. I never tried to publish it more widely, and eventually became so busy I stopped drawing it. But hey... why not?... why don't I put a few of these strips here, just for your entertainment.

As someone who has personally battled addiction in younger days, the strip deals with the various foibles of 12-step groups (which, don't get me wrong, saved my life). Nonetheless, I'd be lying if I said that humorous things don't go on in those rooms.

Anyway, this here was the inaugeral strip that I published way back when.  I hope you enjoy it, and others to follow from time to time... just for laughs. 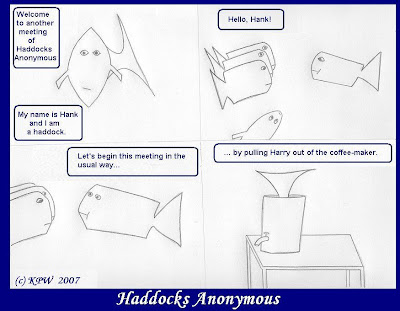 Let me know what you think by leaving a comment.