What's Fibro Like... When There's a Bun in the Oven?

Fibromyalgia is the disease of a million myths, because of all the misunderstandings, half-truths and untruths that exist about it. One of these myths is that it is strictly a middle-aged to older woman’s disease. However, besides the fact that children and men get it too, more than half of women with fibromyalgia are under age 40, still in their reproductive years. This begs the question: what happens in women with fibromyalgia during pregnancy? More specifically, what happens to them, what happens to their baby, and how does pregnancy affect the treatment and course of their fibro?

Well first, let me give you the exciting results of my latest poll in which I asked the question: If you have been pregnant since your fibro started, what happened to your overall level of pain during pregnancy? 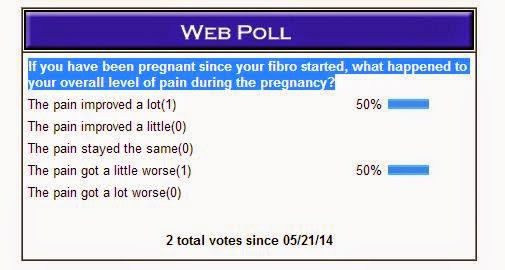 As you can see, a grand total of TWO people answered the question. One woman said her pain improved a lot, while the other said it got a little worse. Not much help. So let me tell you what I've learned about fibro and pregnancy through my past practice as a doctor/fibro expert and my reading of the scientific literature...

How does pregnancy affect fibromyalgia symptoms? To begin with, not every pregnant woman’s experience with fibro will be the same. However, they typically experience an increase in pain, especially over the last few months of pregnancy. This is when even healthy women tend to experience more discomfort, because they are gaining weight rapidly, the baby’s growth is accelerating, and there is increased pressure on their low back, an often problematic area in fibromyalgia. On the other hand, during pregnancy, chemicals like relaxin are released in the body that, among other things, help to relax muscles, which may have some beneficial effect. All in all, however, the average woman with fibro will notice a significant increase in her pain especially over the last few months, particularly in the low back and hip area.

How does fibromyalgia affect pregnancy? This question has two parts. First, how does fibromyalgia affect the likelihood of pregnancy? Though there has been little research in this area, there is no evidence that fibro negatively affects how fertile a woman is. However, many women (and men) with fibro experience discomfort during sexual activities, which may cause them to engage in them less frequently.  Once pregnancy is achieved, fibromyalgia can affect the pregnancy itself. For example, in one study conducted in Israel, 112 pregnant women with fibro were more likely to have smaller babies, recurrent miscarriages (roughly 10% of the women), abnormal blood sugars, and excessive amniotic fluid; but they also were less likely to have a baby born prematurely, and were no more likely to require a C-section or any special procedures.

Are fibromyalgia treatments/medications dangerous for pregnancy? VERY few medications are given a nod during pregnancy, regardless of what they are for or the condition being treated. In fact, some drugs are purposefully not even tested in pregnant women, because of the potential for lawsuits. As such, there is little research to go on. Traditional wisdom, which most doctors follow, is to discontinue as many medications as possible while a patient is pregnant, and this certainly is true for fibromyalgia. Does this mean that a woman must stop ALL her fibro medication? Not necessarily. What it does mean is that she, her partner and her doctor MUST sit down and discuss the various benefits and risks of either stopping or continuing each medication she’s on.

What is the best way to treat fibromyalgia while pregnant? Fortunately, medications are not the only treatments proven effective for FM. Stretching, meditation, yoga, and deep heat ointments may help. Pool therapy and/or sitting in a hot tub may be particularly soothing, especially for those with back pain, and especially late in the pregnancy. Massage may be helpful too, as long as it is not overly aggressive. Exercise is important as well, but must be tailored to the person’s ability and endurance; once again, being in a pool may help. And rest is crucial. Even healthy pregnant women often find the need to sit or lie down to relieve pressure on their back and legs. Scheduling regular 20-30 minute breaks throughout the day can be very helpful. This may require that women in the workforce need to take a leave earlier than they intended; and they should be supported by all parties (family, doctor(s), and employer) in this health-related decision.

Does fibromyalgia have any effects on delivery? Although it might be expected that women with FM will have more pain during labor and delivery than women without, there is no evidence that outcomes are significantly different. This makes sense, given that spinal blocks that can now be given to effectively relieve the pain over the last few crucial hours. As stated earlier, fibromyalgia does not appear to result in premature deliveries or more C-sections, suggesting that women with fibro ultimately tolerate labor as well as other women.

What happens after the baby is born? It is widely believed that a woman’s fibromyalgia will continue to be worse than pre-pregnancy levels, and that has been my experience in the past with most, but not all women. Fibro sufferers typically have very disrupted sleep; and research has shown that the worse their sleep is, the more pain they have, especially in the morning. It’s no coincidence that the mother’s fibro generally doesn’t start returning to baseline until after the baby starts sleeping a bit better. It is crucial also that the woman’s mood is followed closely, since post-partum depression can be missed or misinterpreted as “just your fibro”.

What is important to consider when planning a pregnancy? First of all, once a woman has decided that pregnancy is something both she and her partner want, she needs to make sure she has the proper support in place. Having a doctor who listens to her, a therapist she can turn to, a warm pool she can use, a supportive partner, and additional friends and family members who can help too, all is crucial. Some of this support may come from her local fibromyalgia support group, where she may find women who’ve already gone through all this. Second, although breastfeeding is desirable for the child, if she needs to go back on medications to manage fibro symptoms getting out of control, she may need to choose to bottle feed the baby sooner than initially planned.

Does fibromyalgia affect postnatal mother’s health and postnatal care? Long term, there is no evidence that going through a pregnancy will make a woman’s fibro worse beyond the first 6 or so months after delivery. By then, she should have been able to resume any medications that had been controlling her symptoms, and both she and the baby are sleeping better. She will continue to require the support of her partner, other family and friends, as all mothers do.

If you have enjoyed reading this, please check out award-winning best-selling book on fibromyalgia at Amazon. It has been called a MUST-READ for anyone interested in this sadly misunderstood disease.