THE RAVAGES OF NIGHTINGALE’S DISEASE

Have you ever heard of Nightingale’s Disease? It is a disease described in the late 1800s by Florence Nightingale, who herself suffered from it. It is a potentially-fatal, multi-systemic disease that involves almost every organ system in the body, including the central and peripheral nervous system, the autonomic nervous system that controls things like blood pressure and heart rate, the musculoskeletal system, the skin, the immune system, the heart and blood vessels, multiple endocrine glands, the gastrointestinal system, and bladder. Patients with Nightingale’s disease are two to three times as likely as others their own age to die of heart disease, as well as four times as likely to die of liver disease, and ten times as likely to die of suicide. It affects both sexes at any age. In fact, 10-20% of cases start in childhood, potentially leading to a life-time of suffering and early death.

There’s one more thing about Nightingale’s Disease you should know: I’m the only one who calls it that. Most everyone else calls it fibromyalgia, or fibrositis, or chronic pain disease, or depression, or a crock of #%&@!

Why do I now want to call it Nightingale’s Disease? First of all, I hate the name fibromyalgia for several reasons, starting with the fact that no one can bloody well spell or pronounce it — Fibro-my-lasia? Fibro-my-laxis? Fibro-myfeetgrow? Other big reasons are (1) it is totally inaccurate; (2) it totally belittles the seriousness of this condition, by focussing only on the muscle pain; and (3) too many doctors and others treat fibromyalgia like a smelly, wet sock found in a puddle under their car; they want it gone but definitely don’t want to touch it.

Let’s start at the beginning: Why do I call the name ‘fibromyalgia’ inaccurate? The name means ‘pain in muscles and fibrous tissues’.  It is considered by many doctors, scientists and cross-eyed milkmen to be an improvement over the older name ‘fibrositis’, which meant ‘inflammation in fibrous tissues’, because research has failed to identify any such inflammation under a microscope. First of all, in a recent on-line poll, over 340 individuals suffering from the condition were asked to name their worst symptom. Guess what it was? It wasn’t pain, which only was named by 26% (that’s one in four). Look below and you’ll see what it was: 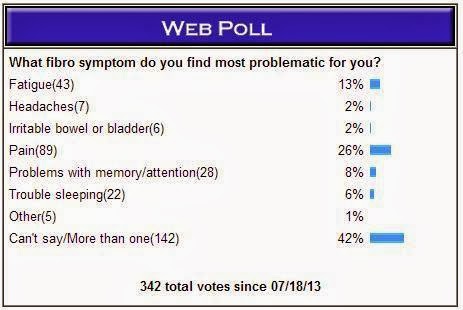 The worst symptom, reported by almost half (42%), couldn’t be named because there was more than one. In other words, there were multiple symptoms.  In another, much larger general population study published in major scientific and medical journals almost a decade ago, pain was rated as a major problem 75% of the time, but so were fatigue and sleeplessness, with mental cloudiness, headaches and a host of other symptoms right behind them.  This brings me to my second major objection to the name ‘fibromyalgia’: it belittles the condition woefully. Think back — how many of you with fibromyalgia have been told, at some point, that ‘at least it won’t kill you’? Maybe it was your doctor. Maybe it was your partner. Maybe it was that cross-eyed milkman I mentioned earlier. But in a recently published study conducted in Denmark, people with fibromyalgia were significantly more likely to die from heart disease, liver disease, and suicide. And, the last time I checked, suicide is a form of death.  “Don’t worry, son. Your mom isn’t dead. She just killed herself.”  Really?

The name also horrifically belittles the multi-systemic nature of the disease. Under a microscope, researchers have discovered that the immune cells don’t function properly in people with fibromyalgia; that high thyroid levels double to triple your chance of having it; that high prolactin levels multiply that likelihood more than twenty times; that cortisol levels are all out of whack (high when they should be low, and vice versa); that the normal night time surge in growth hormone levels is diminished or gone; that conduction of skin temperature is all goofed up; that certain brain cells are gone and brain chemicals like serotonin and Substance P aren’t produced and released properly by the cells that remain; among other things. The name fibromyalgia implies that this disorder just affects muscles and fibrous tissues like tendons and ligaments. But that is a tragic error that completely loses sight of the all-encompassing nature of this disease.

Finally, too many doctors and others already know to duck (and/or hide) when they hear any word that starts with ‘fibro’.  Or to put their shields UP!!!

So let’s go with Nightingale’s Disease. I can give you five good reasons. First, most people won’t have a clue what it is, so you can have a fresh start.

Second, it sounds more official and (a big plus) has the name ‘disease’ in it. Too many critics get all tingly and warm inside calling it ‘a syndrome, not a disease’, as if that delegitimizes it. Of course, don’t tell the parents of a Down’s syndrome child, or anyone with Turner’s disease, or anyone treating the Syndrome of Inappropriate Anti-Diuretic Hormone (SIADH) or any one of the hundreds of genetic, chromosomally-induced disorders listed in any medical dictionary that syndromes aren’t real.

Fourth, Florence Nightingale had it in the 1880s, LONG before there were the so-called ‘overgenerous compensation systems’ some critics claim all fibro patients are trying to milk for easy money.  And she developed it while working in some place like India, not in some compensation-spoiled Western country like Bangladesh (which is, by the way, the country in the world where fibromyalgia is currently most common).

And fifth, because it was Florence Nightingale — the mother of modern nursing, who graduating nurses around the world say a pledge to when they graduate from nursing school, and who is honoured once every year on International Nurses Day — who had this condition we now call fibromyalgia and first recorded it. Why, by the way, is she so highly revered? Because she was a meticulous note-taker, whose records were among the very first to document the risks of spreading germs and thereby was instrumental in the development of current sterile techniques that are used by everyone from nurses to brain surgeons; who was considered a war hero for her tireless efforts during the Crimean War (talk about the world going full circle); and whose social reforms included improving healthcare for all of society, improving heathcare and advocating for better hunger relief in India, helping to abolish unfair laws against women, and expanding acceptable forms of female participation in the workforce. And among her oh-so-meticulous records was her very own diary, in which she documented the chronic widespread pain, fatigue and mental cloudiness she suffered over the last 40 or so years of her life.

So - if we believe her notes about germs, and recognize her brilliance and tireless efforts in so many areas, we don't we believe her diary? Almost certainly, she had fibromyalgia.

And that's why we should maybe ditch the name fibromyalgia and call it Nightingale's Disease instead, or perhaps even Florence Nightingale's Disease; just like amytrophic lateral sclerosis is now named Lou Gehrig’s Disease after the famous and highly-respected baseball player who died from it.

Why not? Maybe with a different name, people will start giving fibromyalgia at least some of the credit it deserves.